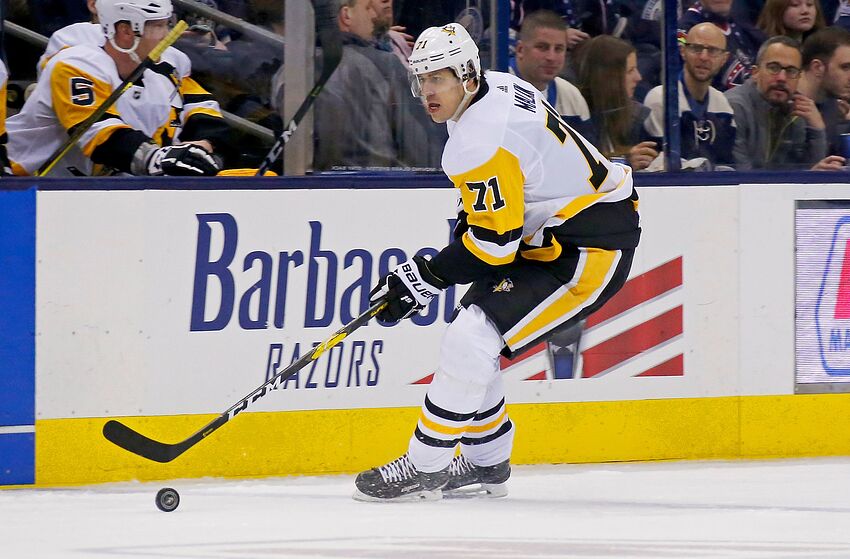 COLUMBUS, OH - FEBRUARY 26: Evgeni Malkin #71 of the Pittsburgh Penguins controls the puck during the game against the Columbus Blue Jackets on February 26, 2019 at Nationwide Arena in Columbus, Ohio. (Photo by Kirk Irwin/Getty Images)

Pittsburgh Penguins captain Sidney Crosby is out for at least six weeks. In his absence, Evgeni Malkin could step up and return to MVP form.

The injuries keep on coming for the Pittsburgh Penguins. Team captain, and leading point scorer, Sidney Crosby will be out for at least the next six weeks as he recovers from surgery to repair a core muscle. Crosby has played in 17 games this season for the Penguins, recording five goals and 12 assists. Those 12 assists and 17 points are good for the team lead.

Losing Sid is never a good thing, and for the Penguins, it comes at a time when other regular starters, such as forward Patric Hornqvist and defenseman Kris Letang, are already on the shelf.

However, one player that has recently returned from an injury, and is playing well this season, is alternate captain Evgeni Malkin. In seven contests so far this year, Geno has compiled seven points (two goals and five assists), including his current four-game point streak where he has amassed one goal and five assists.

This is the perfect time for Malkin to get healthy and heat up. Obviously, when one star player goes down, a team will turn to its other star players, but in the case of Crosby and Malkin, they thrive when asked to step up in the other’s absence. Make no mistake, the Penguins are at their best when both men are in the lineup, but it is important to note that Geno finds another level when Sid is unable to play.

In the 2011-2012 campaign, Crosby was limited to only 22 games. Malkin, who played in 75, recorded 109 points, which was the second-highest total of his career. It was also the only time he has hit the 50 goal mark. That season Malkin won MVP and was the NHL scoring leader.

There has been a lot of talk surrounding Malkin in recent months, regarding his numbers from last season (72 points, -25 rating, and 89 PIM), as well as his age. There were even trade rumors throughout the summer with Malkin’s name in them.

Now, however, is the time for him to prove he is still the same player, and that he isn’t slowing down. The offseason training and the extra motivation had me expecting a big year from Geno, and now, with the chance to lead the Penguins, I think it will be an MVP caliber season. Yes, everyone will need to step up in Crosby’s absence, but Evgeni Malkin will lead the way, and he will be a finalist for the Hart Trophy come June.

With a record of 10-6-2 (9-6-2 with Crosby), the Penguins have been set up to make a run at the playoffs yet again. Now, it is up to Malkin to take the team the rest of the way, at least until the two-headed monster is once again on the ice for Pittsburgh.

Next: Penguins: What to Know About Sidney Crosby’s Injury

Can the Penguins survive without Crosby? Will Malkin be able to step up his game and be an MVP candidate? Leave your comments below!